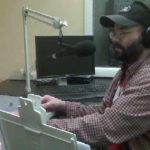 WOCR On-Air Personality/Host, News & Public Affairs Director – September 2008 – April 2011 References: John Shull, Kelly Modad, Jr. WOCR is Olivet College’s radio station. I started as a contributor to Kelly and Kyle Modad’s MoBro’s radio show to getting a show of my own that first semester and each semester throughout my time at Olivet College. I contributed to WOCR in the following ways:

Comments are closed, but trackbacks and pingbacks are open.